VR is real, and it's in my hands! The HTC Vive first impressions...

Ever since I had my first taste of VR back in the early 1990s, I have wanted to get my own headset! That's over 20 years of waiting and about 3 since the real possibility of VR in the home became realised with the Oculus Rift Kickstarter.

I've had both the HTC Vive and the Oculus Rift on pre-order since literally the first few minutes of them starting. Today the wait finally ended and DHL dropped off a surprisingly large box. I hadn't actually expected to get the HTC Vive first, they started their pre-orders a lot later than Oculus did. But "component shortages" means my Rift won't arrive until early June now! 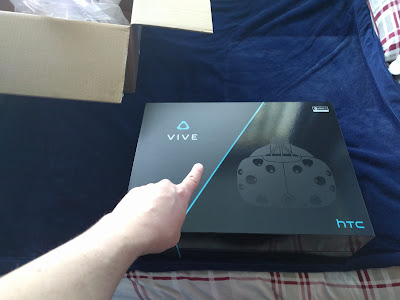 Anyway, once I'd carefully lifted the lid, I discovered all sorts of cables and five... yes FIVE mains plugs!

Fortunately it turns out that two of them are to charge the wireless controllers and I probably won't need them as I can just use any USB port. There's another two to power the "lighthouse" tracking sensors and the final one powers the headset itself.

It still needs three mains plugs to actually use the thing which does feel a little unnecessary. I'd prefer it if the Lighthouses had a built in battery and optional mains leads.

Actually setting the thing up was (for me) a massive pain in the arse! I don't really have the space for everything in the only room in the house I can set it up... I have an area about 3ft x 3ft in front of the PC and that's where the office chair lives. So I have to move that out of the way before I can even begin, and then I can only stand in one spot and try not to move my arms too far or risk hitting my monitors or shelves and cupboards!

I had to drill and screw one of the lighthouses to the wall, the other is perched on a shelf, though that will probably be permanently fixed as well in the next few days.

With all the physical stuff set-up, I installed the HTC Vive set-up software and plugged in the USB lead from the breakout box to the PC... and then the next problem cropped up!

As soon as I plugged it in, it ran thought the "device set-up" routine and then made the dreaded "doo-duhh" noise which indicates the thing you just plugged in isn't recognised. A message popped up on my desktop saying "Not enough USB controller resources"... This was despite me plugging it into a USB 3.0 port with nothing else on that header. I had to unplug all my other USB devices including my USB racing wheel, pedals, webcam, HDD until it eventually decided to work.

My next problem was getting the two hand controllers to sync, when I first set it up, only one controller was active. But after figuring out how to re-sync them, both were recognised!

So that was it... everything set up and ready to go. I ran through the first calibration tutorial and was immediately struck my the sense of scale. The space you stand in is HUUUGE, and it really does feel like you're there. The controllers are tracked so precisely, you can throw them up and instictivley catch them... it's mind blowing.

Blowing up balloons and batting them away with the contoller is such simple yet addictive fun. I even found myself trying to blow them with my mouth... that's how convincingly it fools your brain! You actually think that the balloons are right there in front of you.

After that I entered "The Lab" and tried a couple of the demos, this was when the real limitation of my space became apparent. In order to reach out and pick things up, I have to be right on top of them or my hand hits something in the room, such as the desk. Trying to open drawers in the virtual world is difficult too because when I pull them, I have to open them through my body.

The other awkward thing is if you can't get something because a real life object is in the way, you have to move yourself in the game, because if you don't it's still going to be in the same unreachable location. It takes some getting used to... I really strongly recommend you find a good playing area if you possibly can.

All of that aside though, from what I've experienced so far, it's just phenomenal! I don't notice the Field of View once I'm involved in something, I don't notice the "screen door" effect unless I really look for it... the only thing you need to do is learn to look with your head. If you use your eyes to look to your peripheral vision, things get blurry. The lenses have a small area where they are in focus, and outside of that it gets hard to make out details. It's not a big deal, but I found myself having to line stuff up in the middle of my vision so I could read things.

I do wear glasses, and they do work with the Vive, but I find I've only used them once to test it. My sight isn't that bad, I have a slight Astigmatism but I can use the headset fine without my glasses on.

Anyway, I've not experienced anywhere near enough stuff yet, so I'm going back to the Virtual World... I might report back later to answer any questions, but I can't guarantee it!
Posted by Lufferov at 18:43